Good day and welcome to another edition of the Yamaha Motor Canada Monday Gate Drop. With this week’s Gate Drop we welcome in the month of March and all that comes with it. In the early hours of this coming Sunday we move the clocks ahead, and then in a few weeks time it will officially be the first day of Spring. Let’s hope that Mother Nature cooperates and soon we will be enjoying some nice Spring weather.

I hope everyone had a great week. If you live where I do in Ontario, I hope you made it through the three days of severe winter weather that we all experienced. Other than going to the store or to Subway to get lunch one day, everyone in my area was basically snowed in for three days. Thankfully, it’s over, and hopefully this is winter’s last hooray!

I’m not sure if you all caught the Atlanta Supercross this past weekend, but if you weren’t able to watch it then I can tell you that you missed a pretty exciting race. In the 250SX East class, Chase Sexton made quick and aggressive work of the new bad boy of the class, RJ Hampshire, and rode away to victory. Behind Sexton, Hampshire held on for second while the Round 1 winner, Shane McElrath, came home in third. It was an entertaining race, and with the track being really difficult, it definitely showed how smooth and precise a rider Sexton is. It also showed how far the Geico Hondas have come in the past few seasons. It started with Christian Craig and Jett Lawrence in the 250SX West Series and their results, and now it’s carried over to the East Series with Sexton. The Geico Hondas are some of the fastest bikes on the track now, and the team has done a great job improving the torque of the CRF250. The 2020 Geico Hondas even sound different than the past few models as now you can hear their throaty bark wherever they are on the track. Just like Dylan Wright’s GDR Honda CRF250 last year, these red bikes aren’t down on horsepower any longer and it’s great to see.

Unfortunately, the 250SX East lost one of its top up and coming riders as Joey Crown crashed on the Atlanta SX press day and broke his collarbone. Up until that moment Crown had been having a great start to his series with two Top 10 finishes. Crown’s crash and subsequent injury was a perfect example of how challenging this sport can be as one moment everything is fine and the next, you’re lying on the ground. As much effort as it takes, I believe that these days a rider has to put as much focus into each and every practice session as they do their races. Hopefully Joey’s collarbone will heal quickly and he’ll be back on the track soon.

In the 450SX class in Atlanta, Ken Roczen grabbed the holeshot in the main event and rode away with perhaps the easiest win of his career. With a large group of riders between he and his championship rivals in the early laps, Roczen pulled away quickly, and by the end of the main event he had a 15 second lead. Behind Roczen, Eli Tomac and Cooper Webb got off to horrible starts, and at one point were sitting well outside the Top 10. Tomac collided with Baggett in the early laps causing both riders to go down. Tomac remounted as fast as he could and after getting a shove from Baggett, he was back on his bike, trying to make up ground. For Webb, after his massive crash last weekend in Dallas it was incredible that he was even able to ride his bike. It took him a few laps to get going in the Atlanta main event, but once the adrenaline eased the pain of his injuries, Webb put on a charge that in the end might help savage this 450SX Championship. On a track that was deteriorating faster than you could say “Atlanta,” Webb battled his way right to the checkered flag and ended up taking the final spot on the podium, right in front of Tomac, who also charged hard to finish fourth. It was an amazing points-saving ride by both riders, and now Tomac and Roczen will head into Daytona this weekend tied in points – Webb is now 24 points back of the two leaders. We’re now at the halfway part of the 2020 Monster Energy Supercross Series and the 450SX is still up for grabs. The fans are definitely getting treated to some exciting racing this year, and maybe the best is yet to come.

If you watched the race on television, like I did, the one thing that was strange was during the 450SX main event, the cameras never really showed race leader Roczen. I know he was way out front and pretty much having things his way, and I know that at times there were some pretty intense battles going on behind Roczen, but I would think that you have to show the leader of the race a few times. I mean, at least show the leader for a few seconds and give the viewers a chance to watch how smooth and fluid Roczen was riding. I’m not sure if it was on purpose or an oversight of some sort, but it was really strange not to show the leader of the race at all, not even as he crossed the finish line for the win. With Roczen being a Red Bull athlete, maybe it had something to do with Monster Energy and them calling the shots as the series title sponsor. Anyway, I’m sure Honda and the Roczen camp weren’t happy about it. We’ll see if it happens again. 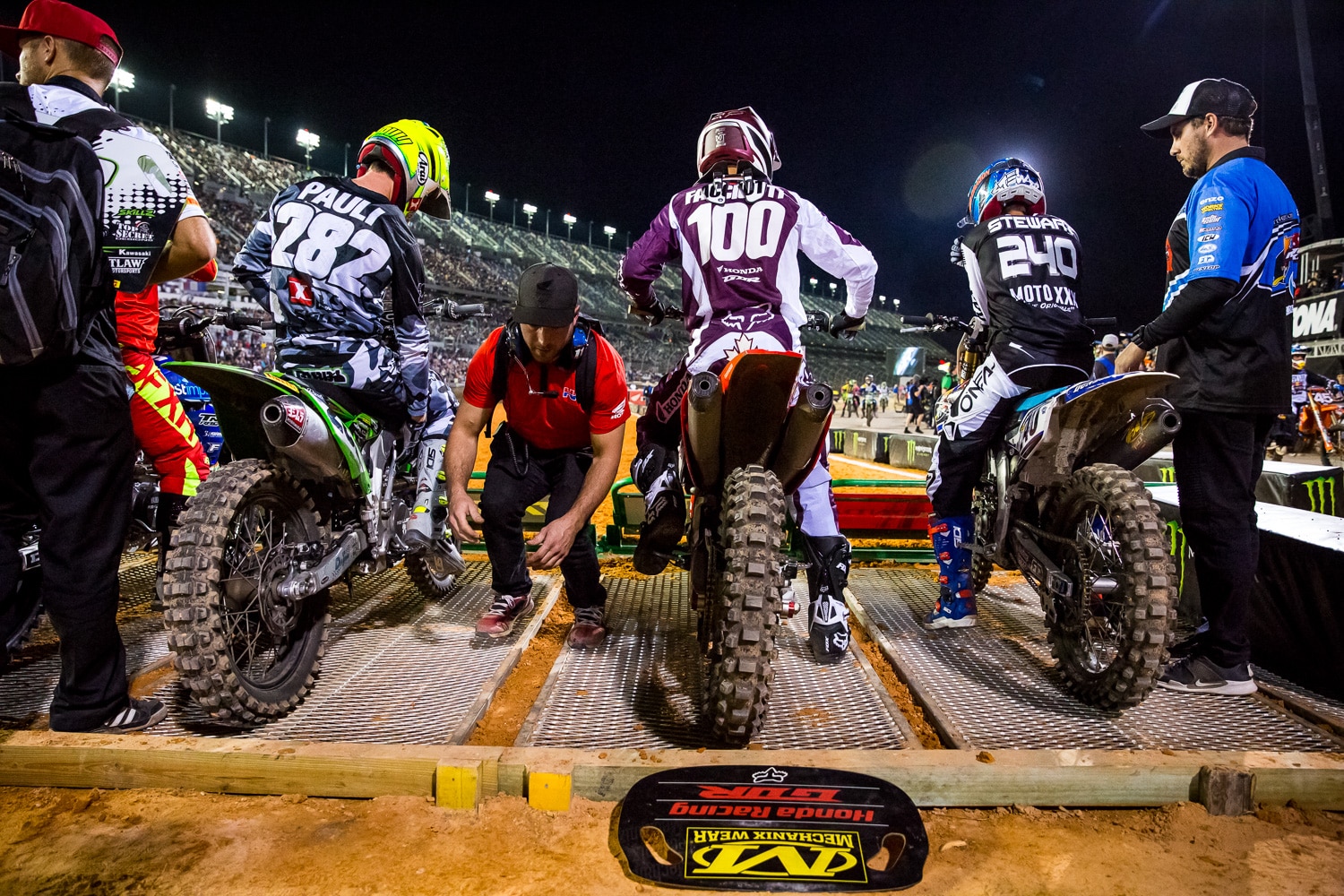 Sadly no top Canadian riders will be lining up this weekend in Daytona. Remember two years ago when Colton Facciotti was on the gate in the 450SX class?

So, now the series moves south from Atlanta to the State of Florida for one of my favourite races of the series, the Daytona SX. I have very fond memories of not only racing Daytona a few times in the ‘90s but also going to watch the race with my Dad when I was a kid. I remember sitting in the massive Daytona grandstands as a 10-year-old wondering if the day would ever come that I’d be down on the track racing. Well, in 1994 those dreams came true. I recall sitting on the starting line waiting for practice in the 250 Pro class, looking up into the grandstands at the exact section I was sitting a decade earlier. Unfortunately, it didn’t take long before I realized that racing Daytona on a stock bike was a very difficult task, and my results were definitely a far cry from what I had dreamed about. Anyway, those Daytona races were so much fun in the ‘90s; there is something special about that event. There had been talk a few months ago that Cole Thompson might line up this weekend, but in talking to him last week, he’s decided that at this time it would be better if he just kept training for the upcoming Triple Crown Series. I wish a few of our riders would line up this weekend in Daytona as I know they’d have fun. However, I certainly understand why most don’t. It’s super expensive racing a US Supercross these days, and unlike how the Daytona track was in the ’90s, today it’s more like a SX than an outdoor track. Thankfully though, we’ll have a large group of Canadian Amateur riders to cheer for in Daytona as a bunch will be competing in the Ricky Carmichael Amateur Supercross in the days after Saturday’s pro day. If you’ve never been to Daytona for the Supercross or Bike Week then you’re missing out on one of our sport’s greatest spectacles.

So, the Daytona SX is this weekend, the clocks also move ahead this weekend, March Break is fast approaching, as is the first official day of Spring. I think it’s safe to say that I’m excited for the month of March. I hope everyone has a great week and thanks for reading. 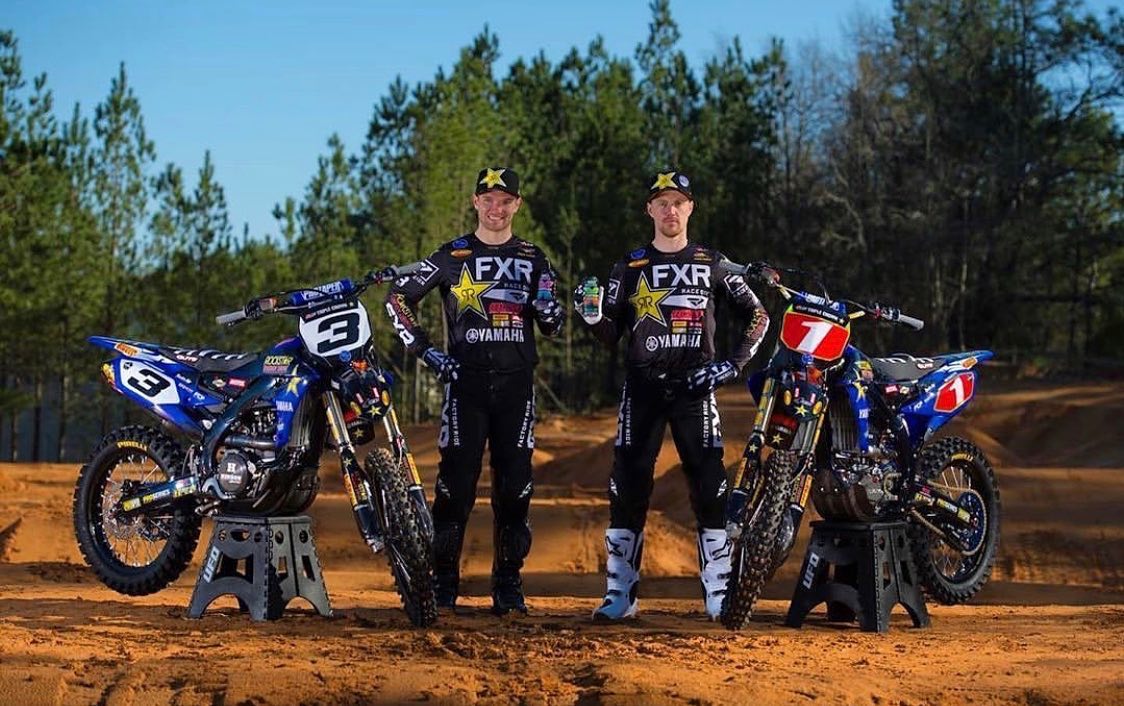